This tasting includes four wines, two from Argentina and two from Chile produced in boutique wineries not widely known.

INFORMATION ON THE WINES

(All information obtained and condensed from several Internet articles.)

The Wine: Winemaker Notes: With a light-greenish yellow color, the Chardonnay has a fresh, expressive nose with tropical fruit aromas fused with mineral notes and a subtle note of toast and brioche from the barrel aging, which greatly enhances complexity. On the palate, a zingy acidity balances out its lush creamy texture.

Robert Parker’s Wine AdvocateThe 2014 Chardonnay Aconcagua Costa was fermented in barrel with indigenous yeasts, and approximately half of the volume underwent malolactic fermentation. The wine rested in used French oak barrels in contact with the lees for ten months. It has a faint lactic nose with some smoky and spicy aromas, a core of yellow plums and waxy apples, as well as some hints of nuts with a commercial, discrete but incipient complexity; it has with an approachable profile without excess (quite subtle within the barrel fermented Chardonnays). The palate is medium-bodied, dry with pungent flavors, good length and lifted by lively acidity. This is a delicious Chardonnay at a very good price. Some 32,000 bottles were filled March 2015

The Winery: Don Maximiano Errazuriz founded Viña Errazuriz in 1870 in the Aconcagua Valley, north of Santiago. This valley has cool, rainy winters, hot, dry summers and moist Pacific Ocean breezes–ideal for growing grapes. Don Maximiano sent for the finest clones from France and with tenacity and perseverance transformed this barren land into a world-class vineyard. Today, the tradition of quality lives on with Don Maximiano’s descendant, Eduardo Chadwick–the fifth generation of his family to be involved in the wine business. Eduardo has overseen the modernization of the winemaking technology at this historic estate while maintaining a distinct identity for its wines, dedicated to producing estate grown wines of superior quality.

The Wine: Winemaker notes: An inviting nose of smoke, tar, licorice, soy, black cherry, and black currant. This leads to a full-bodied wine with layers of succulent fruit, excellent depth and concentration, and a lengthy, pure finish.Blend: 85% Malbec and 15% Cabernet Sauvignon.

Robert Parker: A blend of 80% Malbec with Cabernet Sauvignon grown at 2,080 meters altitude, the 2012 San Pedro de Yacochuya showed some restraint despite its 15,7% alcohol. The élevage lasted one year and it was in 50/50 new and used French oak barriques. But the fruit must have been so powerful that the oak is not perceptible on the nose, and it just contributed to the slow oxygenation of the wine. It has character and good complexity with a mixture of perfumed and soil-driven aromas that are quite serious and elegant. The medium to full-bodied palate is where the fruit also rules with dense, mouthfilling flavors and sweet tannins energized by good acidity. It has concentration and power both in good balance. Utterly impressive! 56,000 bottles produced.

The Winery: (From Wine Searcher) Cafayate is a wine-producing region in the north-west of Argentina. Located within the Calchaqui Valley, Cafayate is arguably the best-known wine region in Argentina outside of Mendoza, and enjoys an excellent reputation due to the quality of the Torrontes and Malbec that is grown here. Cafayate is one of the highest places in the world that is suitable for viticulture.

Cafayate sits at 5600ft (1700m) above sea level, at a latitude of 26°S (which it shares with the Kalahari desert in Africa). This high altitude is what defines the terroir of the region, making it suitable for viticulture despite its close proximity to the equator. The altitude means the sunlight Cafayate receives is more intense than in lower-lying regions, causing the grapes to develop thicker skins as protection against the solar radiation.

The altitude also explains the cold nights, fueled by westerly evening winds from the snow-capped Andes. Temperatures can be around 60F/15C colder than during the day, and it is this diurnal temperature variation that extends the growing season and leads to balance in the finished wines.

The Wine: Wine & Spirits: David Mossman started this company in his garage in the Providencia neighborhood in Santiago. Today he and his partners make about 45,000 bottles of wine each year, including 6,000 of this delightful old-vine, dry-farmed carignan from coastal Maule. It feels expansive and opulent, with tons of ripe red fruits flavor plus notes of violets and spice, all energized by mineral acidity. Although it will age with grace, you may want to pour it now with lamb kebabs.

Robert Parker: There were 19 barrels of the 2013 Truquilemu Vineyard Lot #47, which is from the Empedrado zone in the Maule Valley. This is closer to the coast full of granitic soils with some layered parts, kind of schists, which allow the roots to go deep. The nose is floral, elegant and subtle, a little closed at first, becoming deeper and more nuanced with time in the glass. The palate shows great, citric freshness with a thread of fine acidity going through its backbone. This is mostly Cariñena mixed in the field with other varieties picked and fermented together, but the Cariñena represents more than 85% of the blend in the wine. It has character, notes of the earth and also those violets only the best Cariñena can provide. Plain great, with a long life ahead. I had the chance to visit the vineyard later on and it’s one of those places that when you see them, you understand IT HAS to produce great wine. And in a fresh vintage like 2013, it certainly does.

The Winery: (From Wine.com): Garage Wine Co. began in 2008 with the idea of making wine on a small scale, a personal scale, by hand with the family. It was (and still is!) physical work, and a therapeutic complement to the hustle and bustle of the new millenium. Few in Chile, back then, knew what a “garagiste” was, nor were they familiar with the gringo tradition of celebrated companies having began “in the garage.” Viñas in Chile were large affairs, named after saints and owned by clubby families with long names full of double rr’s who presided over a rather closed circle. The founders of Garage Wine Co. patented the name anyway and went to work, quietly but surely, content to make wine barrel by barrel and selling it amongst friends and family.

(From the winery’s  web page)

“What’s in a Lot?
We began bottling wine in 2001 and we have numbered each bottling since then with a Lot number: Lot #1, Lot #2, Lot #3 and so on. Seventeen years passed and one of our latest releases, from the Las Higueras Vineyard for instance is Lot #72, that is to say, that it is the 72nd bottling we have done since we began in 2001. And that would be pretty much all there is say about how the Lot numbers work, save for answering the question: why so many?

Why so many bottlings? And so few bottles!
Small vineyards belonging to viñadores make for small bottlings, but the story of how we began working with so many is more of a journey. A long time ago we were invited to see a prized property about some old-vine Cariñena. We were shown a farm in tip-top shape, everything in order and with a fresh coat of paint. After seeing dozens of acres of well-groomed fruit we were shown a small section of specific rows that were available if we were interested. The broker spoke at length about the other well-healed buyers who purchased fruit from the property— we just wondered about what control we might have over the growing. What would it be like to be like to be the smallest customer of a large grower?And what would it be like to work with someone or a few smaller growers? Soon we began to look for smaller growers never imaging how small small would be. And this desire for greater autonomy over the growing— a seemingly small factor in the grand scheme of things would take us on a different path altogether.

We have grown a company around making wine from small parcels of old-vines that belong to separate small growers or viñadores whose families have been working these old vines by hand and horse for quite literally centuries. Conclusion: the reason that we have made so many short bottlings of 25oo to 75oo bottles is that we bottle the small parcels separately. “

The Winery: We have 20 hectares of planted vine on trellises with irrigation drip that uses high quality water from underground aquifers and is distributed with high precision in order to use it moderately. the projection to 4 years is to reach the 120 hectares of grapevine planted.

The pruning is a fundamental work for which we give special care to remove those sprouts that will not give fruits, remove the fruits in excess and strip the leaves off to achieve an ideal sunstroke and to assure the quality and quantity of bunch of grapes that we want to obtain.

The crop is manual assuring the care of the plant and the grape to obtain the best results both in field and in the quality of the product, the ideal moment the enologist determines it for degustation of the grape and the determinations of degrees brix. 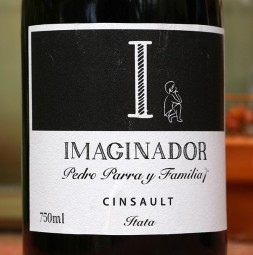 The Wine:  A dark color and heavy aromas of savory berry fruits, leather and animal are less than elegant. This is more soupy, sticky and ripe than most Itata Cinsaults. Candied red-fruit flavors finish on the hot side due to 14% abv.

In the mouth the wine shows an incredible mineral attack from the granite soil, very fresh and long. This wine holds natural acidity and no oak

Robert Parker: There is a new red that is produced with old vine Cinsault field blends, from three dry-farmed vineyards in Guarilihue and Florida, planted together with a little Moscatel, Semillon and País, as all the old vineyards have a field blend with multiple varieties. It also has some 20% Cariñena from a separate vineyard. All the grapes from each vineyard were harvested and vinified together, and the blend goes by the name of 2015 Imaginador. It was kept in concrete and stainless steel tanks until bottling in March 2016. It has a really fresh, floral nose with aromas of acid strawberries, a touch of raspberry leaves and plenty of red juicy fruit such as watermelon and pomegranate… It’s very drinkable and fresh, with unnoticeable tannins. A red of thirst, and a very good one at that! 13,500 bottles produced.

The Winery: There is no published  information about this winery. Valle de Itata is south of the Maule Valley.  Traditional varieties still predominate in Itata, believed to be Chile’s first wine region, as the original vines entered through the port of Concepcion. This historical, cool-climate region is dominated by plantings of Carignan, Muscat of Alexandria and Pais (aka Mission, aimed more at domestic cosumption but adventurous growers are planting noble varieties such as Cabernet Sauvignon and Chardonnay with good results.

VINOTABLES RATINGS FOR THIS TASTING: