TASTING OVERVIEW: The “challenge” of this tasting is to identify the country, region and varieties of these wines.  The wines are:

INFORMATION ON THE WINES

(All information obtained and condensed from several Internet articles.)

Vinification: After the harvest, the grapes are carefully selected, and the healthiest ripest fruit is placed in cases in a well-ventilated room to raisin for 3-4 months. After this period the grapes are pressed, left on the skins for 15-20 days at the temperature of 23°-25°C, and fermented till becoming the delicious wine that Amarone is. The wine is aged in oak barrels for 36 months

Winemaker Notes: Ruby red in color, intoxicating aromas of dried black cherries, cassis, truffles, and chocolate fudge leap out of the glass. The resulting wine is silky, luscious, and complex, with a lingering finish.Decanter:Pronounced mocha chocolate and cherry aromas. Rich, intense and full on the palate with firm tannins and fresh acidity. Long finale.

The Winery: The heart and soul of Zenato lies in the ancient morainic lands of Lugana and Valpolicella, with their mild climate and unrivalled charm, that overlook the Veneto shore of Lake Garda..The vineyards cover 75 hectares in the Zenato estate of S. Cristina in San Benedetto di Lugana, ideal for the Trebbiano di Lugana, and in the Costalunga estate in Valpolicella, the homeland of the famous Amarone Zenato, where the renowned vines Corvina, Rondinella and Oseleta are cultivated.It all began in 1960 when Sergio Zenato, filled with energy and ambition and driven by his deep bond with the territory, tried out new techniques of winemaking and invested in native vines in order to obtain wine of the highest quality.

The Wine: Winemaker Notes: Ruby red, tending to garnet red with aging. A broad, ethereal and compound smell with hints of violet and a pleasant hint of wild berries and vanilla. Dry, warm and velvety, denoting a rich texture and fine breed. Pair with: Roasted red meat, noblegame and medium aged cheese.

Wine Spectator: Cherry, leather and iron notes mark this suave, elegant red. A bit reticent now, but the fruit is fresh and long on the finish. The dense tannins leave a mouthcoating impression, but this opens up beautifully over a few hours. Best from 2021 through 2035.

The Winery: Brunello di Montalcino: Made from 100% Sangiovese grapes from a specific clone called “Brunello” in the town of Montalcino. Situated in the southwestern part of Tuscany the town of Montalcino sits on a ridge about 400 feet above the Eastern plain. This ridge divides the region into three diverse growing areas. The northeastern part produces wines with brighter fruit, more cherry and high tone notes and somewhat leaner body. The southeastern portion often referred to, as the “Golden Triangle” is the home of Biondi Santi, the family who invented Brunello and championed its production for half a century before anyone else. This region produces wines with rich body, deep ripe cherry to plum fruit with lots of earth and spice. The third portion is the southwesterly facing slope which is the warmest (hence the ripest grapes), consistently producing wines with more breadth and richness. At the turn of this century, there were more than 150 growers who produce the 233,000 cases annually from the 2863 acres inscribed to Brunello.

The (estate overall covers approximately 80 hectares. The vineyards consist of 44 hectares, sub-divided into the “crus” of Altesino, Macina, Castelnuovo dell’Abate (in the district of Velona), Pianezzine and Montosoli (the latter famous for the production of extremely elegant wines). Other than Sangiovese di Montalcino, the majority of the grapes grown (used to make Brunello, Rosso di Montalcino Palazzo Altesi), there is Cabernet Sauvignon and Merlot (blended with Sangiovese di Montalcino to make Alte d’Altesi and Rosso di Altesino), Trebbiano and Malvasia (for Vin Santo) and Vermentino, Chardonnay and Viognier used to make Bianco di Altesino.

The Wine: Winemaker Notes:The color reveals distinctive violet highlights. A refined and complex nose showing aromas of violets and fruits of the forest. On the palate a wine that is rich and powerful yet with a perfectly balanced and harmonious structure, and a long aromatic finish. Blend: 70% Grenache, 15% Syrah, 15% Mourvedre.

The Wine Advocate: Cristia’s 2012 Châteauneuf du Pape is a classic example of this cuvée and offers loads of upfront fruit, texture and richness in its fruity, ripe style. Giving up plenty of darker fruits, old leather and damp herbs, enjoy this medium to full-bodied beauty over the coming 7-8 years.

The Winery: The property of the Grangeon family for many generations, Domaine de Cristia is located in Courthézon, on the eastern sector of Châteauneuf-du-Pape and spreads over 58 hectares. Ninety percent of the terroir is composed of sandy/clay soils planted on the Eastern sector of the appellation (lieu-dit ‘Cristia’). These parcels of Châteauneuf-du-Pape benefit from a cool, fresh north-easterly exposition which allows the grapes and wines to develop supple, elegant tannins.

The Wine: (Jeanne Cho Lee) This is a well made St Julien with nice palate texture and weight with good depth of fruit. Flavours range from fresh blackberries, spices, cedar and Chinese red dates. The nose is restrained but the palate is generous with a nice length. Tasted in: Bordeaux, France. Maturity: Young.

The Winery Taken from Wine Searcher): Chateau Lagrange was classified as a third growth in the 1855 Classification of the Médoc and Graves and is located in Saint-Julien, on the left bank of the river Gironde. Historically, there is evidence that grapes were planted here in the Middle Ages and that, at the time, the proprietors owned the largest wine-producing estate in the Médoc area. It was passed between many well-known wine merchants and families throughout the 18th, 19th and 20th centuries until the current owners, Suntory, purchased the estate in 1983. The plantings at the château are predominantly Cabernet Sauvignon, Merlot and Petit Verdot, as well as Sauvignon Blanc, Sauvignon Gris and Semillon.

The large 182 hectare estate of Chateau Lagrange has 118 hectares under vine in Saint Julien. The vineyard is divided into 102 different parcels. However, the easiest way to think of Chateau Lagrange is by knowing all their vines are dispersed over 2, gently sloping, gravel hillsides, well placed in the west of the St. Julien appellation. At the peak of their vineyards, the hillsides reach up to 24 meters, which puts their vines at the highest elevation in the St. Julien appellation. The vineyard is planted to 67% Cabernet Sauvignon, 27% Merlot and 6% Petit Verdot. The Petit Verdot was added to the vineyards in 1988. Over the years, the vineyard has continued to increase their percentage of Cabernet Sauvignon. Today, the average age of the vines is more than 35 years of age. The terroir is gravel, sand and clay soils.There are also parcels with deposits of iron. The vineyard is planted to a vine density of 8,500 vines per hectare. They use optical sorting technology during the harvest. 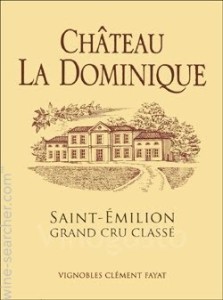 The Wine: Winemaker Notes: With its deep and shiny color, Chateau La Dominique brings together the generosity of a Saint Emilion and the typicity of a Pomerol. The nose is intense, characterized by seducing aromas of ripe fruits and subtle spicy notes. In most vintages, you will find truffle and licorice notes, complemented by peppery and woody aromas. With a sharp attack, it is fleshy and round, with silky and precise tannins. The finish is long and full and leaves you with a pleasant feeling of bliss. Aimed to be aged in most vintages, but can also be appreciated during its early years.

The Winery: These are some of the main features of the winery:

The Wine: (The Wine Mag) The wine comes from what many consider to be the Grand Cru of Nuits Saint-Georges. It is firm and structured with solid tannins over black-cherry fruits. There is a tight streak of acidity that cuts through the wine giving a crisp center to the fine fruit. Drink this wine from 2019.

The Winery: The Domaine was created in 1887 by Eugène-François CHEVILLON, who inherited from his father Symphorien CHEVILLON a few parcels of vines. Eugene CHEVILLON succeeded him. In 1946, his two sons, Georges and Maurice, shared the family estate. In 1947, the Domaine Georges CHEVILLON expanded with the acquisition of Nuits-Saint-Georges 1er cru “LES SAINT-GEORGES”. In 1963, his son Michel joined him on the Domaine, which he still operates with his wife Pascale, and in 1988 created Domaine Michel CHEVILLON. In 1999, their daughter Claire moved to the Domaine. Philippe CHEZEAUX, her husband, joined her in 2000 to create the Domaine CHEVILLON-CHEZEAUX which currently operates 8 ha 61 to 75 acres of vines all classified in AOC on 14 different appellations.

VINOTABLES RATINGS FOR THIS TASTING: